After 4 weeks of drying I placed the pressed clay Chicago James Scoville building “Sullivanesque” panel in the kiln and turned ‘er on.

I changed the program on the controller slightly for this piece by bumping the temperature up and adding 10 minutes soak time to when the kiln reaches that temperature.
About 37 hours from now the kiln will shut off and take half a day to cool down before I see what I get.

Meanwhile, here it is sitting in the kiln when I turned it on. The light yellow colored deals touching the back of the panel are shelf posts and I placed them on both front and back so that should the panel want to tip- it can’t.
The two red pyramid haped deals resting on top of the posts are called “cones” and they will partially melt and bend over at specified temperatures each uniquely is formulated to do that at, so they tell me if the kiln got hot enough- what it was set to, or too hot- hotter than I set it for.
In this case there’s a cone 1 which bends over at 2,079 degrees F and a cone 2 which bends over at 2,088 degrees F, and yes they are THAT accurate that 9 degrees in a furnace that is over 2,000 degrees can be measured accurately.

The temperature and soak time much like baking a cake or making toast in a toaster- also affects the final color and “doneness” of the terracotta. This clay I use is a brick red that as the temperature goes above that cone 1 starts to turn brown- it can take cone 5 (2,167 degrees) at which point it turns a dark chococate brown! I’ve never gone higher than cone 1 but it would be interesting to experiment with a smaller piece.

So far I’ve shown the modelling process, the hand-pressing process and now the kiln firing process will wrap it all up in a sort of educational “How the architectural terracotta was made” in Sullivan’s day and before. 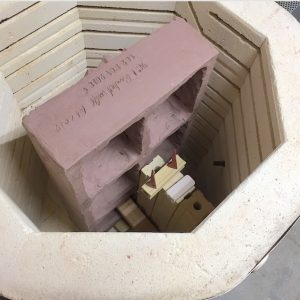